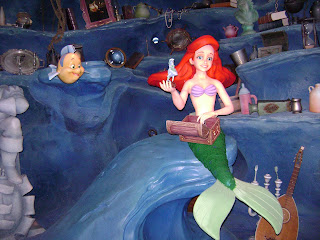 About a month ago, on a Saturday morning, I sat sipping coffee and relaxing. I switched on the television and turned to TCM (Turner Classic Movies). Since I adore old movies, especially those from the 30's,40's and 50's,  this is often my movie channel of choice. Hollywood movies of this bygone era, as well as some European, especially British comedies(love that Brit humor), are favorites of mine. A British movie happened to be playing that morning, one that I had not seen before, and I was totally enthralled. I will get back to that later. Mermaids! There is something so alluring about the notion of that mythological, half human/half fish, creature . My grandchildren adore them. They love movies about mermaids. They collect mermaid dolls and mermaid toys. One of the newest attractions at Walt Disney World was inspired by Disney's movies about the mermaid, Ariel, who started out her Disney character life in the movie "The Little Mermaid." The new attrac
9 comments
Read more
More posts