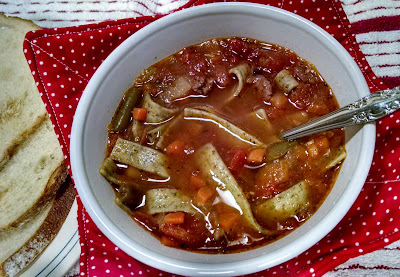 My fear of cooking with pressure cookers goes way, way back to my childhood. My grand kids would say it was back in the Olden Days, because I am pretty old(en), after all. My mother cooked things in a big old stove top version of the pot known as a pressure cooker/canner. I actually own the last pressure my mother owned. It is harvest gold.  The story I am going to tell you involved the pressure cooker she owned before the harvest gold one. The catastrophe that took place in Mama's kitchen left me traumatized and fearful at the prospect of ever using one of them. I tried, really hard, to work up enough courage to try out the old harvest gold pot I inherited from my mother. When it came down to it, however, the vision of what happened that day was still just too disturbing.  I was twelve years old, at most when it happened. It left quite an impression on me, nonetheless!  My mother had apparently crammed that pressure cooker to the brim with those butter beans and when the coo
Post a Comment
Read more
More posts