The Ruins of Prince William's Parish Church AKA Sheldon Church 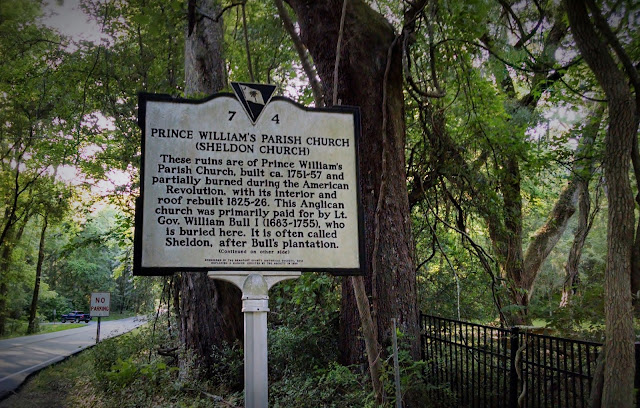 There are so many amazing and wonderful things in life to experience and see if we but take a few moments to stop and look around.. Beauty can be found in some out of the way places. This post is about one such beautiful place. At least, it is beautiful to me, because I happen to really enjoy rambling through old churches and graveyards. The ruins of the Prince William's Parish Church and graves is such a place. The church was built between 1745 and 1753 and was named Prince William's Parish Church but was also called Sheldon Church. As the sign indicates, the church is also called Sheldon Church. Building of the church was primarily paid for by Lt. Gov. William Bull and was sometimes referred to as Sheldon Church after Bull's plantation, which was also called Sheldon. The church was constructed in the Greek Revival style. It was burned by the British in 1779 during the Revolutionary War. It was rebuilt in 1826. The church was alleged to have been burned again in 1865
Post a Comment
Read more
More posts